On February 4, USGIF and the Open Geospatial Consortium (OGC) held the first round of the inaugural GEOINT Innovation Tradecraft Competition, propelling forward a conversation on the evolution of the nascent mission analytics tradecraft and the importance of discussing new challenges and strategies to achieve mission success.

“[Regarding] geospatial intelligence—as old as the tradecraft is—there are still things to be discovered. That’s exciting because it is in this work that new discoveries will be made,” said the Honorable Sue Gordon, 2020 recipient of USGIF’s Lifetime Achievement Award. 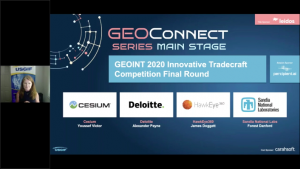 In the first round, there were 17 presentations from 15 companies on the best practices in data discovery and alignment to address mission problems through visualization, data sharing, and interoperability. Concluding round one, the judges selected Cesium, Deloitte, HawkEye 360, and Sandia National Laboratories to move on to the final round. Pixia and Presagis were selected as runners up.

On Wednesday July 29, the four finalist once again shared their innovative ideas for the final round of the tradecraft competition, held on USGIF’s GEOConnect Virtual Main Stage.

“It is an unabashed feeling to hear and see quite frankly our future,” said Robert Cardillo, President of the Cardillo Group and a judge in the first round of the competition. “[The participants] are stretching the bounds of our thinking and reimagining our tradecraft.”

Youssef Victor, 3D Graphics Team, Cesium, discussed how to automate interoperability of 3D geospatial data and analytics on mobile devices in disconnected environments with on-device analytics using Cesium JS and 3D Tiles to not only empower warfighters but also enhance their decision-making and situational awareness in his presentation, “From Disk to Disconnected.”

HawkEye 360’s Director of Operations James Doggett demonstrated how to use RF data to discover activity and material that has gone unseen in the middle of seen area in their presentation, “Invisible Needles.” Deloitte data scientist Alexander Payne highlighted the accomplishment of running AI on-device, drastically reducing data streaming costs, and reducing the latency of real-time mission-critical alerts in his presentation, “AI at the Edge.” He showcased several demos of running AI on $10-$450 computer boards. He also discussed a web-based app developed to remotely command and control these devices, while also viewing real-time alerts. Forest Danford, Critical Skills Master’s Program Participant of Sandia National Laboratories, showcased a software architecture collaboratively developed by SNL and ARI summer interns at the University of Illinois at Urbana-Champaign in his presentation, “Big Data for Actionable Intelligence.” The chief aim was to design a system on natively distributed software that was capable of near-real-time processing and fusion of many disparate data types, resulting in the autonomous generation of actionable intelligence. 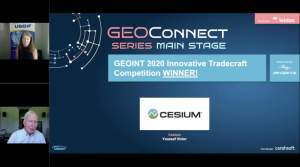 “What we saw here was very powerful. It was tradecraft, innovation, and community coming together,” said the Honorable Jeff Harris, former Chairman of the USGIF board, just before announcing the winner of the competition.

And in a very close race, Cesium and Youssef Victor won the GEOINT 2020 Innovation Tradecraft Competition.

“I am very excited to represent Cesium today, and this victory is a reflection of the work that the Cesium team has put in. We always like to push the boundaries. Everyone on the team has put in a lot of effort into making Cesium the best it can be,” said Victor.

Learn more about The GEOConnect Series.